Day One on Charleston Harbor 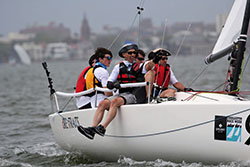 CHARLESTON, S.C. – There is no more picturesque sight than Charleston Harbor during the annual regatta that has brought international recognition to this historic city.

A fleet of almost 260 sailboats in 18 different classes take over almost every inch of the Cooper River and it truly is a sight to behold. With seven different race courses set in various pockets of the harbor, a spectator viewing from land can see colorful billowing sails everywhere they look.

Sperry Charleston Race Week 2019 got off to a rip roaring start with south-southeasterly winds ranging from 10 to 20 knots allowing organizers to complete four races for most of the classes doing windward-leeward courses.

“It was an absolutely beautiful day on the water, a great day for racing,” said George Collins, who skippered Chessie Racing to victory in Spinnaker PHRF A class that completed a 17-nautical mile Pursuit Race. “You can’t beat the conditions, which were perfect for our boat. We have a great crew and they had the boat sailing very fast.”

Chessie Racing, a Tripp 62, is the highest-rated boat in Spinnaker PHRF A and therefore started last. Collins, a Miami resident, had two Wounded Warriors aboard along with his usual professional crew. Collins said Chessie completed the race in almost three hours even and wound up overtaking the J/120 Emocean on the leg back into the harbor for the finish.

There was some great action on the inside courses with the wind shifting wildly at times and a short squall wreaking some havoc then causing conditions to change significantly.

Class newcomer Buddy Cribb sailed Victory into the early lead in J/70 class, largest of the regatta with 56 boats. Barr Batzer was aboard as tactician while Scott Ewing (headsail trimmer) and Chris Manson-Hing (bow) completed the crew as Victory posted a solid score line of 1-3-4.

“We got good starts, we went the right way and we went fast. We also didn’t do anything too risky,” said Cribb, a resident of Jupiter, Florida.

Cribb has been sailing in the Etchells class for 15 years and suddenly decided to “give something different a try.” The Coral Reef Yacht Club member has about nine regattas under his belt and has clearly climbed the learning curve quite quickly.

“This is a really tough fleet so we’ll see if we can keep it going,” said Cribb, whose last appearance at Sperry Charleston Race Week came about eight years ago with the Etchells.

There is a fleet of 37 Melges 24s on Circle 3 and class veteran Bruce Ayres set the pace on Day 1 – winning two races and placing second in another in posting nine points. Mike Buckley is calling tactics on Monsoon, which is three points clear of Lucky Dog, the Gill Race Team led by skipper Travis Weisleder. 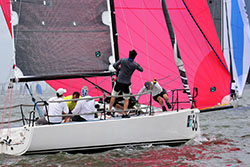 “Charleston is always a very tricky spot to sail. When the ocean breeze comes in and the wind shifts back-and-forth and the tides are swirling, it’s tough,” said Ayres, a Newport Beach, California resident. “We got two good starts and two not-so-good starts. When you can get off the line and go in the right direction it definitely helps.”

VX One, with 30 entries, is the largest class on Circle 1 and the 19-foot speedsters were buzzing around the Cooper River at high speeds. Reigning North American champion Chris Alexander and his crew on Counterproductive showed on opening day they will be tough to beat, winning three of four races.

James Roe is serving as forward trimmer while Jack McKenzie, a 15-year-old Charleston junior sailor, is working the middle for Alexander, runner-up here last year. John Potter and David Guggenheim, the two-time defending champions at Sperry Charleston Race Week, had to pull out of the regatta at the last minute due to pressing business commitments.

“I wish those guys were here because I enjoy sailing against them,” said Alexander, who hails from Ocean Springs, Mississippi. Alexander loosened up the rig prior to the fourth race because the squall that came through caused the wind to lighten. However, the breeze built back up into the mid-to-high teens during the race. Former College of Charleston All-American Reed Baldridge is steering Tudo Bem, the entry led by skipper Michelle Warner that is one point behind Counterproductive.

“We were just faster than everyone to be honest. We had superior boat speed the first three races,” said Alexander, who hit 17 ½ knots of boat speed during a downwind leg of Race 2. “We had four perfect starts and were super-fast upwind.”

RS 21 class is making its debut at Charleston Race Week with a healthy fleet of eight boats. Chicago resident Amy Baxter steered Team Sail22 to an outstanding opening day, winning three races and placing third in the other.

Jake Sorosky is handling the bow and calling tactics for Baxter while Kevin Coughlin (jib), Danny Lawless (bow) complete the crew. Baxter, who normally races a Vanguard 15, is learning the RS 21 just like everyone else in the fledgling class.

“We’re all in the same boat so to speak as far as experience,” she said. “It’s an easy boat to sail, super stable. All credit to my crew, which did a fantastic job of getting around the course.”

Mike Bruno has been bringing Wings to Sperry Charleston Race Week for several years and has never come away victorious – not even a runner-up finish. The Armonk, New York native is hoping his team’s success on Friday is a good omen as Wings began the regatta with results of 2-2-1 before a blown-out spinnaker led to a fifth in Race 4.

“We had really good starts and really good boat speed,” Bruno said. “This boat tends to be quicker in a breeze so we were glad to see the velocity increase as the day went along.”

Bruno said Wings was overlapped with Exile and Spaceman Spiff at the finish of the two races it placed second. “For some reasons I’ve been jinxed in this regatta. Hopefully, things will finally come together this year,” he said.

Warrior Sailing 1, skippered by Sammy Hodges, grabbed the early lead in J/22 class after winning two races and placing second in two others. Navy veteran Ruben Munoz (jib) and Army veteran Troy Rassmussen (main) are the warriors aboard the boat.

“This is my first time competing here at Charleston and it was really cool out there,” Munoz said. “We worked really well together as a team, which was great to see.”

College of Charleston sailor Carson Shields worked the bow aboard Warrior Sailing 1, which benefitted from doing two practice sessions on Thursday. “I’m so impressed with the improvement Ruben and Troy made in the span of just one day on the boat,” Hodges said.

On the offshore Hybrid Pursuit classes, the ORC Class A, B and C entries had a light start to the day – taking more than three hours to complete the 7.4-mile out-bound course due to the flood current and light air under eight knots.

Despite the light air and challenging conditions, the Pursuit Race concept seemed to work across the wide variety of boat types in this division – ranging from Victor Wild’s speedy TP52 Fox to Miles Martschink’s J/105 – because the racing in corrected time was also close with the top eight places in Race 1 within one minute.

Robin Team, a multi-time Palmetto Trophy winner, led the J/122 Teamwork to victory in both races on Friday. Team said the return race into Charleston Harbor, which began with a fleet start, was approximately 9 ½ miles due to a windward jaunt to a drop mark.

“We’re primarily accustomed to doing windward-leeward courses around the buoys so this point-to-point racing was a little different for us,” Team said.

Team credited tactician Jonathan Bartlett with making some “extraordinary calls” during the Pursuit Race into the Atlantic Ocean. “That, coupled with Kevin Ryman’s great navigation, gave us a leg up on the race out,” said Team, who praised his brother Adam for doing an “incredible job” of trimming the spinnaker during the race back into the harbor, which was primarily a downwind affair.