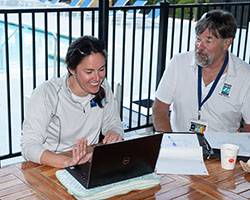 Becky Royal, schoolteacher by profession and pretty much Superwoman whenever Sperry Charleston Race Week rolls around.

This is Royal’s third year coordinating all the on-water volunteers, as well as managing the large fleet of powerboats needed to run a regatta that attracts almost 260 boats in 18 classes.

Royal, a first grade teacher at Mount Pleasant Academy, was recruited to help manage a volunteer army of almost 200 folks by Sperry Charleston Race Week Director Randy Draftz. Royal and Draftz both crewed on the same sailboat for a while and he asked if she would like to get involved with the prestigious international regatta.

“Randy and I had talked over the years about different ways I could help and he eventually approached me and asked if I would coordinate the on-water volunteers,” Royal said. “The first year I did it with a group of four. It was a good chance to learn about the job from people who had done it before.”

Royal referred to Lynn Swann and Fran Trotman as “great mentors” and is happy the latter remained part of the team when there was a transition last year.

“It is a team effort, definitely not a one-person job,” Royal said.

Royal initially met Draftz through the local sailing community then got to know him better when both volunteered with the Charleston Ocean Racing Association (CORA). Royal is very active in the Charlston racing scene, having recently crewed aboard a J/105 and Swan 42. She is also a dedicated volunteer for many causes, including Charleston Community Sailing’s “Women on the Water” program.

Draftz spends considerable time in advance of Sperry Charleston Race Week buttoning up various issues and otherwise laying the groundwork for the four-day event, being held April 11-14 this year.

“I think planning starts in earnest in January with sending out emails and calling past participants to figure out exactly who is available,” Royal said. “One of the neat things is that our return rate is so high for the number of volunteers that want to come back and do race committee. It kind of makes it easy in a way.”

Royal would never say that teaching first graders is good preparation for managing a team of volunteers, but does believe she has the patience, understanding and interpersonal skills necessary to do so.

“It’s managing 175 people and they’re all amazing and great, but it does require a lot of communication,” said Royal, who is constantly being pulled in different directions, spends all day responding to text messages and voice mails and usually has two people waiting to speak with her.

Thursday brought bad news as a signal boat for one of the courses endured breakdowns and had to be taken out of commission for the regatta. Royal must make sure all the race committee boats arrive on schedule, are operating properly and have a slip somewhere in Charleston Harbor.

“The logistics can be challenging at times. There are an awful lot of moving parts,” Royal said. “I do like organization as far as putting all the puzzle pieces together. It’s enjoyable and stressful at the same time.”

Royal’s favorite part of Sperry Charleston Race Week is when she boards a boat and heads out on the water for racing each day. After all, that is why every volunteer is here – to help sailors enjoy four days of great competition.

“I love seeing the event come together. We spend so much time building up to the actual regatta, it’s great to finally see the whole fleet leave the harbor and go out racing,” she said. “It really is amazing that we have seven circles going on at the same time.”

Draftz gathers all the local volunteers that comprise the official organizing committee for a meeting every Wednesday to review preparations for Charleston Race Week. Royal called the veteran race director “very easy to work with.” Draftz is originally from Chicago and found volunteering with various sailboat racing organizations was a good way to blend into the Charleston community. “Charleston has a great way of finding talented people to do volunteer work. It grabs you hook, line and sinker,” he said. “What’s unique about Charleston is that the community shows great appreciation for people who do the type of things we do.”

Draftz knows after three years that Sperry Charleston Race Week landed a good one in Royal, who never gets flustered and brings an innate determination to making sure all the volunteers know exactly what is expected from them.

“It’s a huge job that we have asked Becky to undertake. It’s the hardest job going,” Draftz said. “Somehow, she’s still smiling despite losing a signal boat and having some other issues. It’s all about attitude – just get it done. You make the best of things and move on. “You can’t freak out or get upset. You have to be pleasant because you’re dealing with volunteers.”

Fortunately, most of the volunteers with Sperry Charleston Race Week have that mindset and the inevitable problems that arise are dealt with.

“Just keep tacking up the middle because it will always work out somehow,” Draftz said.

Royal is the subject of this year’s “Volunteer Spotlight,” but there are many, many others that are equally deserving of special recognition.

“Where else could you find the depth of volunteers to run seven race courses? It’s very, very impressive what these people do every year. It’s become a well-oiled machine,” Draftz said.